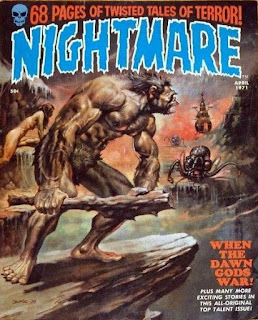 Boris Vallejo handles the cover for this issue of Nightmare, featuring the interior story When the Dawn Gods War, with a cover date of April 1971.

We kick off with "The Inner Man" featuring story and art by Tom Sutton, with assist on the art by Dan Adkins. Sutton goes under the pseudonyms of Sinclair Rich for the story and Sean Todd for the art. Dr. Wroclaw experiments on the soon to be executed prisoner Varga, shrinking his body considerably. Varga is soon mistakenly swallowed by Wroclaw when he downs a pill and ventures his way through his body, eventually reaching his brain. Being insider Wroclaw, Varga is able to control his actions, causing him to slap, then strangle his wife, then murder a man at a pawn shop and run over people in a car. Eventually Wroclaw is decapitated by a closing elevator door and some subconscious monsters kill Varga. A pretty fun way to kick off the issue, especially when Wroclaw starts going on his rampage.

Second is "The Victims" by Gerry Conway (story) and Rich Buckler (art). Two scientists, Frank and Tad work on creating indestructible clones. Frank jealously kills Tad, thinking back to how they first met and his fear of him taking his fiance Susan. He soon kills Susan as well, but then realizes that he has actually killed their clones and they are still alive. An indestructible clone climbs out of a tank and kills Frank.

Third is "Vault of a Vampire", featuring, in his Skywald debut, Al Hewetson for the story and Serg Moren for the art. A vampire stalks ancient Rome, attacking someone in the Arena, and having previously appeared at other crowded events. A trio of men seek to destroy the vampire. During its latest attack, they follow the vampire to the graveyard and the crypt where it makes its home. They wait outside the blocked entrance, thinking they can wait out the vampire. A couple of weeks pass and they break in, finding that the vampire has started devouring its own flesh. They then kill it with swords. I question Hewetson's knowledge of vampires in this story, it should be seeking to drink blood, not consume flesh. If it was supposed to be a ghoul as well, this was never stated earlier.

Fourth is "When the Dawn Gods War!" by Gardner Fox (story) and Paul Reinman/Mike Esposito (art). The caveman Kroog is surprised to see several flying saucers land. Out from one comes the octopus-like alien Thropoli, who puts a head band around Kroog's head and tells him to help him find a human who has fled to this planet. Kroog is saved by a dinosaur by the hiding human, then later gives a head band above his mate. The hiding human causes lightning to appear, making himself come off as a god to Kroog, then convincing him to create a poison for the Tropoli via some plants. Kroog gives the poison to the Tropoli, who fly off. The hiding human meanwhile is revealed, having used advanced equipment to fool Kroog into thinking he's a god. He decides to call Kroog Adam and his mate Eve. Rather lame ending aside, the rest of this story is pretty good.

Fifth is "A Rottin Deal" by Bruce Jones (story and art), using the pseudonym Philip Roland. A young man named Peter travels with his uncle Felix, seeking an old mine around five days away. As they travel through the desert wasteland, devoid of water, Peter decides to kill his uncle and take his canteen. He travels from oasis to oasis but finds that Felix's corpse is following him, beating him to the water, contaminating it. Peter rushes ahead of the corpse, making it to the next oasis in time to drink some water. However he soon finds that his uncle had leprosy, and having uses his canteen, he now has it too! Jones' story and art here is quite strong, making this the best story of the issue. Jones would later become one of Warren's most prolific, and best writers during the Louise Jones era.

Sixth is the text story "Horror Man" by Art Stampler. Our protagonist is a doctor helping the movie star Tracy Collins, who is convinced he is a werewolf. The two of them go to the doctor's home where Collins runs amok, although remaining human, getting eventually run over accidentally by a mistake. When the police arrive however, Collins has transformed into a dog!

Following the text story is the one page "Nightmare Pin-Up #2", with art by Chic Stone. This features a number of rotting corpses rising from the ground, including one that looks quite a lot like Warren's Uncle Creepy.

Our seventh story is "Soul of the Warlock" by Chic Stone (story & art). Erik Mortus is obsessed with summoning the undead, and when his wife comes across what he is doing falls to her death. Mortus drugs various men, trying to summon the sorcerer Esteban Delgado, but each time he does so, his captive's body catches aflame and burns up. He finally succeeds with summoning Delgado after capturing the fortune-teller Lefarge. Delgado is upset at Mortus for disrupting his rest though, and summons a group of corpses to kill him!

The issue concludes with "Beware Small Evils!" by Jack Katz and Frank Giacoia (story and art). In the polluted future of... 1983 (lol), a motorcycle gang, the Spitfires are running amok. Meanwhile a Senator is visiting a scientist who hopes to use the plant culture mutation #320 to restore oxygen to the atmosphere. When the Spitfires arrive at his lab and cause some of the mutation to fall outside, it quickly spreads, consuming the spitfires, growing and multiplying. Using detergent and oil supplied by the senator, the mutations are destroyed, although this leads to any remaining oxygen running out.

The story features an incredibly lame joke at the end where the scientist has the Senator stabbed, claiming politicians are full of hot air.
Posted by Quiddity at 8:20 AM