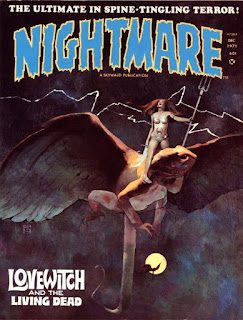 Jeff Jones makes his Skywald debut painting the cover for this issue of Nightmare, cover dated December 1971 and featuring the Love Witch character.

The one page frontispiece for this issue is "Medea" by Michael Kaluta.

We start with "Love Witch and the Battle of the Livng Dead" by Marv Wolfman (story) and Ernie Colon/Jack Abel (art). Well, I speculated at the end of the previous Love Witch story that this may be a continuing storyline and that appears to be the case here as the Love Witch is young again, and we even have her pet lizard Friji alive. This story is even more of a confusing mess than the previous one. The Stonehedge priests rise from the dead the hag Atulak to battle Burnick the Love Witch. At some point Atulak succeeds in slaying Burnick, but her spirit rises from her body and the fighting continues, with Burnick eventually winning. The story concludes saying this is only the beginning, but I really hope that is not the case as these Love Witch stories have been awful. The only redeeming part is the Ernie Colon art.

Next is "The Living Gargoyle" by Jerry Siegal (story) and Carlos Garzon (art). The ugly, bald, malformed Julio is angry at the world and the people who mistreat him solely because he is ugly. He gets assaulted on the street merely for looking at a woman. Julio makes his way into a museum where he stands before the Gargoyle Shrazzgoth. He asks for two wishes, both of which the gargoyle grants. First, he is made incredibly handsome, and second everyone else is made ugly. He goes outside to taunt people and they kill him. The ending for this story was quite easy to guess once Julio wishes everyone else ugly. The role of the Gargoyle in this story is a rather odd one as it is just there to grant wishes, something I didn't know gargoyles could even do. Skywald would eventually have gargoyles as one of its more well known continuing characters, but this appears to be an unrelated story.

Third is "Broken Sparrow" by Larry Todd (story and art). Kenzor is a tiny alien who looks somewhat like a humanoid bird. His ship explodes and he crashes on Earth, where he is found by some boys who take him and bring him home in a glass jar. Kenzor is kept there as a pet, who fascinates the family, aside from the mother, who wants him to get rid of him. Kenzor can understand everything being said but can't communicate until he fixes a translation device he has with him. He is finally able to do so and calls out to the mother, who freaks out, and flushes him down the toilet!  This was one of my favorite Skywald stories yet; I feel quite bad for Kenzor and his fate though!

Next is "Corpse by Computer!" by Robert Kanigher (story) and Doug Wildey (art). Millionaire inventor Phillip Talbot has created the supercomputer Debbie, which operates many things in his mansion. Upon bringing a woman home with him, Debbie kills her with a mechanically controlled knight. Debbie desires Phillip as her companion and won't let him have anyone else. When Phillip starts a relationship with the psychiatrist Karen Benton, Debbie kills her too. Phillip has had enough and tries to delete Debbie's memory, only for her to electrocute him to death. Another more sci-fi type story, although not as good as the previous one.

Fifth is "The Cosmos Strain" by Steve Stern (story) and Mike Kaluta (art). Richard Arndt, in his book "Horror Comics in Black and White" speculates that Stern isn't a real person, but rather a pseudonym for Kaluta. The story features the starship Parnassus, which travels the universe, studying a contagion that has destroyed all life on the planet Medallion. The scientist Broome, his assistant Zork and the robot Darukk investigate, heading to the planet where Zork mistakenly lets out the contagion and Broome is killed. Zork and Darukk realize the only thing to do is use the Sterilibomb, blowing up the planet, and killing them. Kaluta's art is good but I wasn't the biggest fan of the story. This is now three sci-fi stories in a row! Surprising to see in what is supposed to be a horror magazine.

The issue concludes with "The Geek" by Pat Boyette (story and art) making his Skywald debut. Its great to see some work here from Boyette, he was an artist I enjoyed quite a lot at Warren, although he didn't do too much work for them (maybe 10 stories or so). Max Schuller finds the bizarre Geek during the winter, eating one of his hens raw. Max, whose wife had died, leaving him alone, takes in the Geek. Eventually word of the Geek spreads and the local Baron has him seized, brought to his castle where he can amuse him. One day the Baron strikes the Geek, and the Geek in retaliation kills him, putting his head up on the tower with some stone ones. The Geek then flees, returning to Max's home where he seems him one last time. The Geek disappears, and is never seen again, but Max finds that he did him one final act of kindness, digging up his wife's body so he wouldn't be alone. Boyette doesn't disappoint as this is quite a strong Skywald debut for him, both the story and art.
Posted by Quiddity at 5:31 PM