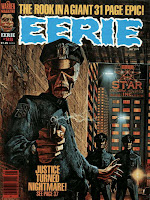 This issue features a cover by Patrick Woodroffe of a skull faced cop. Due to an elongated Rook story, there's only three stories in this issue.

First is the Rook in "Quarb and the Warball" by Luis Bermejo (art) and Bill Dubay (story). At 31 pages, this is tied for the longest story in Warren history. This story features multiple creations from a fan contest held in Eerie where fans submitted story ideas. This story features a man named Quarb, who was born millions of years ago when the Earth was populated by apes due to alien interference. Quarb is not only super smart, he also is immortal. When the Rook finds out about his home he desires to go back in time to see the first intelligent man. Dane meanwhile goes in the past to meet his ancestors. In the past Rook is captured by apes and goes through a long ordeal where he is unable to meet Quarb, gets abducted by the aliens who were looking for Quarb, and finally does meet him in his home, but Quarb acts unintelligent and the Rook leaves. Dane encounters his ancestors, who are fighting a man named McQuarb who just happens to be both Quarb, and Dane's ancestor. Finally, Quarb himself arrives in the present to look at the Rook's creations and laboratory. A rather too complicated story and too long story, with way too much words.

Second is "Got You On My Mind" by Russ Heath (art) and Bruce Jones (story). This story features a man with a skull birthmark on his cheek that has dreams of people who has caused violence. He goes to them in real life and kills them. However he has a dream of a murderous woman who is actually just an actress and is killed by cops when he tries to strangle her. One of the cops there has the skull birthmark appear on him as well afterwards.

Last is the conclusion to the "Honor and Blood" series, with art by Leo Duranona and story by Nicola Cuti. This story brings us to the present time, where Sean Vrykola (who has changed his name to Varly) goes to Romania to meet his cousin Mara and learn of the family history. Mara lives all by herself except for a pair of vicious dogs. Sean learns of his family's vampire history, while at the same time there have been vampire related murders occuring. Sean meets Mara's father, who is crazy, and returning home finds out that she is a vampire after all. She runs and gets killed by her dogs, but it ends up it is actually his wife Peggy who was the killer. Sean and Mara are normal after all, and get married, ending this series on a more pleasant note than usual. A top notch series throughout, its a shame that it ends here after only three stories.
Posted by Quiddity at 6:57 PM