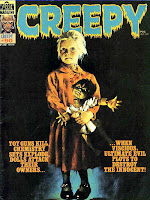 Enrich provides the cover for this issue of Creepy, one of his few Creepy covers.

First is "Warrior on the Edge of Forever" by Jose Ortiz (art) and Bill Dubay (story). This story was originally intended for the war special of the prior issue. Its about a man who has dreams of prior lives as a soldier in important wars and conflicts. This story features photos of Warren production assistant Bill Mohalley as a dictator.

Second is "The Wash Out" by Leo Duranona (art) and Bruce Jones (story). A man and an android head out to a planet to find a woman. The man has a lot of disrespect for the android, although they do end up having sex with each other. Eventually they find the woman, who ends up being an android trying to pose as a human, and she's killed by them. Our protagonist ends up being an android after all, the android companion was actually a human all along, and he ends up shorting out his circuits when he drinks some coffee.

Third is "The Search" by Carmine Infantino & Gonzalo Mayo (art) and Roger McKenzie (story). This story is about a town's search for a vampire that has been killing many of its occupants. The story is told from a person who lost his lover to a vampire. It ends up that our narrator is the vampire, and he ends up getting killed by his own father.

Fourth is "Please... Save the Children" by Martin Salvador (art) and Bill Dubay (story). This story tells of a child killer whose daughter ended up dying after she ran away after being spanked. This causes him to go out and start killing children of parents who he perceives as treating them badly. Even though his father is the President of the US, this doesn't stop the prison from executing him.

Fifth is "The Sacrifice" by Auraleon (art) and Jose Toutain (story). This story tells of a tribe which feels the need to sacrifice its most beautiful virgin each year to its God. Even though the sacrifice this time is the chief's daughter, they go ahead with it anyway. The God they worship ends up being a giant computer. A short story at only four pages long.

Last is "Dollie" by Leopold Sanchez (art) and Roger McKenzie (story). This story was originally intended for the previous Christmas special. It features children being given horrific gifts by Santa Claus that cause havoc, such as a rifle that a boy uses to shoot his parents, not knowing it was real and a chemistry set that blows up the entire house. Another girl is given a doll that acts like a vampire. When the mother tears off its head, her daughter's head falls off. It ends up that it isn't Santa, but rather Satan that is giving out these gifts.
Posted by Quiddity at 5:57 PM