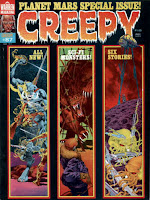 This issue is a special issue dedicated to the planet Mars. Nicola Cuti is credited as an editor (below Louise Jones and Bill Dubay) for this issue only. The cover is by Berni Wrightson; it is not an original cover but rather colored reprinted panels from art he did within the magazine. Wrightson was reportedly rather upset when he found Warren had done this; its a practice they used occasionally throughout the years, although mostly on reprint issues such as Creepy 82 and Eerie 78. An excellent issue, with only one poor story.

First is a one page feature titled "Four Classic Martians", drawn by Berni Wrightson. It features four panels of various martians. Two of these panels would be used on the cover.

Next is "A Warped Tale" by Gray Morrow (art) and Al Sirois (story). This was Morrow's first Warren appearance since the cover of Eerie 10 in 1967, and his first interior story since Creepy 10 in 1966. Unfortunately it would also be his final Warren appearance. The story features two astronauts who end up going through a timewarp, and find themselves on Mars, thousands of years ago. Mars at this time is a beautiful planet, very similar to Earth. From two of its inhabitants who they meet, they find that Mars is battling a planet that exists between Mars and Jupiter. The aliens from that planet can't breathe on Mars, and vice versa. Eventually these aliens attack, pumping their atmosphere into Mars. When our heroes retaliate, its sets the entire planet on fire. The enemy's planet is destroyed, creating, the asteroid belt that exists today. A very interesting and well drawn story to start the issue.

Third is "A Martian Saga" by Berni Wrightson (art) and Nicola Cuti (story). Rather than an actual story, this is a 6 page poem, told with three panels per page. It features a man coming to Mars who meets a tribe there, confronts a monster, and meets a beautiful woman. Alas, its not a happy ending for him as he suffocated when he takes off his oxygen mask while with the woman.

Fourth is "Those 'Orrible Passions of '78" by Carmine Infantino & Dick Giordano (art) and Bill Dubay (story). This issue's best story, it features a retiring detective being interviewed about the most mysterious case of his career. It involved multiple events occuring within a short period of time where parents murdered their children, then died themselves shortly after. At the same time an old man off in the wilderness just lied down in his yard during a snowstorm and died. Throughout the story we are shown similar events occuring on Mars involving a martian and its dead children. The detective wonders if the death of an alien race somewhere in the universe occuring at the same time as these murders influenced them in some way. As an epilogue we are shown the mysterious face on Mars. A very interesting story.

Fifth is "The Last" by John Severin (art) and Roger McKenzie (story). This story features a humanoid Martin who lives on Mars all alone with a robot. The martian is very depressed over the fact that the humans that used to be there are now all dead. The robot starts playing a movie for him, but the martian, trying to get him to stop, electrocutes himself. Ironically, the movie reveals that he wasn't a martian at all, but a mutated human, effected by radiation from the war on Earth that forced humanity to flee to Mars. All alone, the robot kills himself.

Sixth is "They Come Out at Night" by Martin Salvador (art) and Bruce Jones (story). Some astronauts arrive at Mars and find a prior expedition wiped out, with just corpses there. The story then flashes back to the past where one of the astronauts arrives at Mars, finding that his wife is sleeping with another man. When learning of her infidelity he tries to leave her, but it ends up that she is actually possessed by roach like creatures who infect the other crew members when she kisses them. He kills her, but her corpse still comes after him as its still possessed by the roaches. In the present time, our protagonists are confronted by her corpse, which is still possessed by them!

Last is "Warmonger of Mars" by Ralph Reese (art) and Wally Wood (story). This story was reportedly created a long time before this issue, but not printed until now. The issue's sole poor story, it is a comedic effort featuring a man and creature on Mars. Yawn. Reese's art appears heavily inspired by Wood here.
Posted by Quiddity at 4:48 PM