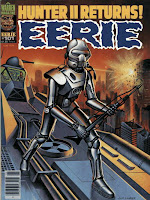 Jim Laurier provides the cover for this issue, featuring a robot in a futuristic city.

First is The Rook in "The Martians Are Coming, The Martians Are Coming!" by Jim Starlin & Alfredo Alcala (art) and Bill Dubay (story). The art in this story looks markingly different than the usual art for Starlin and Alcala, an odd combination. Like most of the recent Rook stories, this features a dual storyline of the Rook in the past and Bishop Dane & Manners on an adventure. The Rook goes about a hundred years in the past where he encounters a robot inventor and a rival of his, who ends up being Adolf Hitler's father. In the present Dane and Manners help stop a revolt by members of the US's own government. Somewhat better than the last few Rook stories for the simple fact that its considerably shorter and simpler.

Second is the second part of "Gotterdammerung!" by Isidro Mones (art) and Budd Lewis (story). Our heroes battle the aliens, trying to retake the Earth from them. During the fight Jericho is severly injured, then transported to another human ship where one of our hero's father is aboard. They fight off the aliens and are reunited as the story ends.

Third is the third part of "The Horizon Seekers" by Leo Duranona (art) and Leo Duranona & Cary Bates (story). Our heroes depart the mountain and arrive in a warmer landscape where they are pursued by a group of tribesman. They are chased to a castle filled with knights and a wizard named Merlin. Upon entering its revealed that it is actually just a museum and Merlin is just an old man who like them has lost his memories and is merely hypnotizing people into believing that they are actually in the middle ages. As the story ends the tribesman arrive once more to attack the castle.

The issue concludes with Hunter II in "Three Flames of the Phoenix" by Pepe Moreno Casares (art) and Budd Lewis (story). Ten years have passed since the conclusion of the Hunter II saga. Karas is set to be married, but an old wizard arrives and tells him that she has been kidnapped by an evil wizard. Karas, the wizard and the Exterminator head off the fight the evil wizard. During their trip the allied wizard is killed and the Exterminator is trapped under a rock. Karas finally faces the evil wizard, who ends up being Mandragora (who ended up being the main villain in the series) himself. Browne Loe, the wizard who led him there arrives, and reveals that the entire scenario was a set up so he could kill Mandragora himself once and for all, which he does by sacrificing himself. This actually is a pretty good story from both an art and story standpoint, but its quite puzzling why this stand alone Hunter II story appears out of nowhere. It had been nearly 30 issues since the series concluded, and this didn't kick off a new series, but rather ended immediately after this single story. Its also dissappointing to see them use someone other than Paul Neary for the art, who did both the Hunter and Hunter II series.
Posted by Quiddity at 6:24 PM