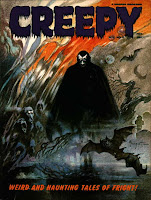 Here's an early issue of Creepy from 1965 from Warren's original golden age. The cover is one of many Frank Frazetta classics. Frazetta did almost all of the early Warren covers, many of which would be reprinted in the later years as Warren declined tremendously. This cover would be re-used itself for the second to last issue of Creepy in 1983.

After the frontis "Creepy's Loathsome Lore" by Angelo Torres (art) and Archie Goodwin (story), featuring zombies, is "Family Reunion!", also written by Goodwin, with art by Joe Orlando. When an elderly farmer passes away, his youngest son murders his older brothers so he can have complete control of the farm and sell it to someone else. His brothers come back as a two headed rotting corpse and take revenge.

Up next is "Untimely Tomb!" by Angelo Torres (art) and Archie Goodwin (story). The title is credited to Anne Murphy, Goodwin's wife. This story features a doctor who is humiliated when a girl whom he pronounced dead is found alive by her brother, only for her to die due to being entombed alive. The brother confronts the doctor, who strikes him down and ends up killing him. When his corpse is put in the doctor's family crypt he fears that it is alive and heads inside, dying of fright after thinking it true. Only it ends up the corpse was stored elsewhere and he was on his own after all. This story is ranked within the top 25 stories in Warren's history in the Warren Companion, although I have a hard time seeing why. Torres and Goodwin had plenty of other stories such as "Soul of Horror", "Dark House of Dreams", "Ogre's Castle" and others that I felt were a lot better than this story.

"Sand Doom" by Al Williamson (art) and Archie Goodwin (story) is third. A man abandons his partner in the desert and finds a treasure guarded by a woman and snakes. The woman warns him not to take the treasure or he'll be cursed, but he guns her down and takes the treasure anyway. As he continues through the desert he discovers that the treasure has turned into a snake, which bites him and turns him into a snake as well.

"The Judge's House", a Bram Stoker adaption is next, with art by Reed Crandall and story by Goodwin. A man moves into a house that was owned by an evil judge. As the nights pass he finds a number of rats inhabiting the house with him. Eventually the ghost of the judge himself appears from out of a portrait in the house and kills him.

Fifth is "Grave Undertaking" by Alex Toth (art) and Goodwin (story). This story was Toth's first one for Warren. A pair of undertakers make a deal with a doctor to bring him dead bodies for use in medical classes. They initially dig up graves, then start committing murder to fulfill this task. Upon hearing of a nearby town with a number of deaths, they head there and take all the bodies. What they hadn't realized was that all these people died from a vampire, and thus have become vampires themselves!

Last is "Revenge of the Beast" by Gray Morrow (art) and Goodwin (story). Five men scouting for railroad tracks encounter gold in the desert, along with an old indian man who tells them to leave. They gun down the man then split up. Soon all but two are dead. The last remaining men encounter the indian man again, and transform into beasts that kill each other, just what happened to the three other ones.

Overall, a terrific issue, with outstanding stories and art for all six stories here. I'll probably lean towards "Grave Undertaking" as being the best one overall here.
Posted by Quiddity at 6:57 PM