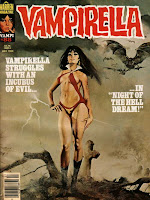 This issue of Vampirella is from the summer of 1980, shortly after Louise Jones quit and Bill Dubay took over as editor once again, under the alias "Will Richardson". For a short period of time during 1980, Vampirella was reduced to three stories per issue, but the two backup stories after Vampirella were usually of longer length and much higher quality than usual. This is the first of those issues. All the stories were uncredited, but the contents page does list the writers which is where that information is from. Hopefully I didn't make any mistakes.
After another cover by Enrich, comes this issue's Vampirella story, "Night of the Hell Dream", written by Dubay, and drawn by Rudy Nebres, in his first Vampirella story. The story surrounds Vampirella fighting her evil self in her dreams. With the help of Conrad Van Helsing, who gets in a fight of his own, she is able to defeat her evil self. The story's not bad, but Nebres's art just doesn't do it for me. He was quite dreadful at drawing human faces in my eyes. Despite that, he was quite a prolific artist for Warren, doing over 50 stories for them.
Up next is "Nightwalk" by Auraleon (art) and Bruce Jones (story). The story is about a man named Bob whose lover Lucenda is killed in a car crash, yet he can't help but think that she's still alive. He finds multiple personal ads from her in the newspaper but is unsuccesful in his attempts to meet her at the cemetary until he kills the caretaker. The whole thing ends up being a setup from his best friend Rick who was trying to get Bob to kill the husband of Lucenda (his lover), the caretaker. Only Lucenda ends up falling for Bob after all and kills Rick, but she is locked in a crypt by Bob. Very good story with quite spooky art from Auraleon.
Last up is "The Talent of Michael Crawley" by Jose Ortiz (art) and Archie Goodwin (story). The story is about Michael, a young boy whose rather shy and withdrawn but has the ability to fly. A powerful political advisor and his lover try to take his power to their advantage to sell to foreign powers, but he overhears their plans. At a demonstration of his flying ability, Michael gets revenge by using his power to send the entire demonstration site into outer space. While not as good as "Nightwalk", its still a pretty good story.
I'll be away for a few days next week and probably won't make any posts, so I'll try to make that up by doing an extra review or two this weekend.
Posted by Quiddity at 7:15 AM