This issue features a cover with Dracula holding a female victim in his arms. The frontis for this issue is "Portrait of Dracula" by Auraleon (art) and Fred Ott (story). This two pager spans both the front and back inside covers.

First story is "Dracula", with art by Tom Sutton (the first two pages feature art from Bill Dubay) and written by Dubay. This story is the first of a three part series starring Dracula, who had originally appeared in a few Vampirella stories in issues 16 through 21. The story features Dracula being sent to a sea port in the early 1900's where he takes over a ship and encounters a haggered witch whose been eating hearts to stay alive. After the Conjuress (a powerful being who was also from the Vampirella series) is killed by her, Dracula kills both the witch and her assistant. Pretty good story here, which would continue over the next few issues.

Next is "The Things in the Dark" by Jim Janes (art) and Fred Ott (story). Janes was usually paired with another artist in his stories, and unless I'm mistaken, this is his only solo story. A caretaker of a graveyard asks a supernatural expert to help him solve the mysteries of the events taking place in the graveyard. It ends up that a group of giant worms have eaten all the bodies in the graveyard and the caretaker brought in the expert to be a meal for them. Janes's art is pretty good here, its too bad he didn't do more solo stories.

Third is "Garganza!" by Paul Neary (art) and Bill Warren (story). This story is Warren's version of Godzilla, feauturing a tyranosaurus rex running amock in Tokyo, and managing to wipe out all of human society only for things to start all over again millions of years later.

Next is "The Root of Evil" by Martin Salvador (art) and Mike Jennings (story). A bum is hired by a scientist to take part in an experiment to help humans be able to breath carbon dioxide. As the days go by, his body slowly turns into a tree while a nearby plant becomes more and more human. Eventually the tree-man is unleashed on society, but is luckily able to be stopped. 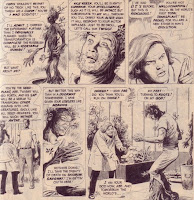 Fifth is "Planet of the Werewolves!" by Reed Crandall (art) and Gerry Boudreau (story). Crandall's art is absolutely dreadful here, the worst art he'd ever do on a story for Warren. A trio of astronauts come across a planet overrun by werewolves, except for a single man, who they bring aboard. One of the astronauts is killed while repairs are being done. Eventually the other two discover the truth, that the man they brought aboard is a vampire, whose going to get them to take him to Earth. Crandall's art kind of spoils what is otherwise not that bad a story.

Last is "The Giant", part of the 'Dax the Warrior' series, with art and story by Esteban Maroto. This series was a reprinting of 'Manly' which Maroto had originally done in Spain. Except for the final story, all the stories were stand alones and can be read in any order. I don't expect to review them in order on this blog due to that fact, although I will try to do the finale last. Anyway, this story surrounds Dax encountering a cyclops giant and the wizard controlling him. Dax refuses the wizard's offer to take his place and defeats both the cyclops and him.
Posted by Quiddity at 4:47 PM