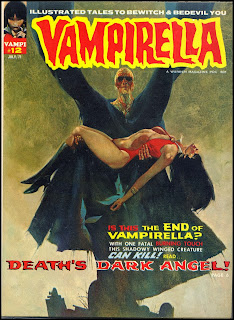 Today in my first individual issue coverage in a long time, I will be going over Vampirella #12. This issue is notable for having the first appearance of Manuel Sanjulian, who did the cover, as well as Jose Gonzalez, who did his first of numerous Vampirella stories. Frank Brunner provides the story and art for this issue's frontis, titled "The Sirens!"

First is "Death's Dark Angel" by Jose Gonzalez (art) and Archie Goodwin (story). This story features Vampirella being captured by an old man, W.W. Wade, who also controls a demon called Skaar. Wade wants to cheat death and thinks he can do so by getting Vampirella to bite him. He captures the Van Helsings as well. Vampirella eventually does bite him, but because she's not a traditional vampire, it kills him for good. Gonzalez's art is so-so here, but over time it would greatly improve.

Next is "Amazonia and the Eye of Ozirios!" by Billy Graham (art) and Gardner Fox (story). Amazonia had previously appeared in a couple of stories in Creepy and Vampirella. The evil Dread Throkklon captures or kills numerous innocents, bringing them to his castle Grimkrag. Queen Amazonia heads to the castle to take him on and finds the eye of ozirios glaring at her. Many men attack her but she defeats them (including an entire page of no dialogue or captions, featuring her hacking away at many foes). Eventually however she is captured by Throkklon and set on a cross, to be burned alive. When more forces arrive, Throkklon is distracted and Amazonia is able to escape, then stab the eye, which causes Throkklon and his men to fade away, as they were actually dead men brought back to life by the eye.

Third is "Quest" by Jeff Jones (story & art). This story features a mere 2 panels per page, with some nice artwork by Jones. The story features a hunter pursuing a woman, who is attacked by another man, then flees using some elephants. She is attacked by a saber tooth tiger, but the hunter arrives, seemingly to save her, but in reality to kill her. The twist at the end reminds me of a little bit of "Yellow Heat", my favorite Warren story.

Fourth, and final story in this issue is "To Kill a God!" by Wally Wood (story & art). This story takes place in Egypt, with the Romans having invaded and taken over. The Roman Governor, Marcus, rescues the Egyptian Princess Cleopatra from reanimated corpses attacking her, summoned by the God Anubis. The two fall in love, but she is later attacked again by Anubis's forces. Cleopatra fears that Anubis will kill Marcus so she heads off to the river Styx give herself to him. Marcus heads there and takes on Anubis himself, who is revealed to be a werewolf. The two, having both been bitten by him, do not return to Egypt, considering themselves monsters, but instead head to Transylvania. I have heard this story was an attempt by Wood to show that he still had it after he had faced some criticism over how much effort he was putting into his work and how much his assistants were providing. Its some of the best and sexiest art you'll ever see from Wood.
Posted by Quiddity at 1:25 PM

I love your posts, I'm a "lurker" fan of all the old Warren books who much appreciates what you've posted over the years.

Hi there. I've been trying to figure out if this is the issue that contains the first appearance of Vampirella nude. I once came across an article on the net that identified the first totally naked appearance but I can't for the life of me find it. #12 didn't ring a bell but I may just have forgotten. Any idea which issue it was by chance? Get back at city.limits@hotmail.com (Rob)