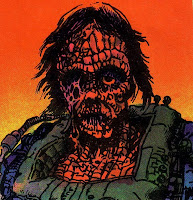 
Overall, a terrific issue, one of Creepy's bests. Outside of the rather confusing "High Time" no bad stories, and the art is terrific across the board. Unfortunately this would be Creepy's only issue with two color stories.
Posted by Quiddity at 8:43 AM