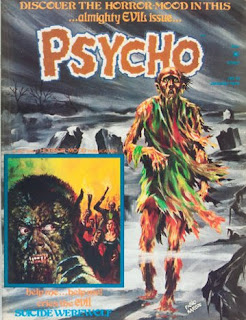 Pablo Marcos and Fernando Fernandez provide the cover for this issue of Psycho, cover dated January 1973. A rather odd approach, with one cover (Fernandez's) within another cover (Marcos's). Warren would do something similar with the cover for Vampirella #9 (although the outer cover was just pen and ink rather than a painting).

First story is "The Suicide Werewolf" by Al Hewetson (story) and Pablo Marcos (art). A bearded man in a room is repeatedly told to confess, but refuses. He falls into a pit where a snake attacks him, then is put on a stretch rack, repeatedly told to confess to being a werewolf. He is able to get off the stretch rack only to find a mannequin/skeleton was the one holding him. He escapes to the streets of New York and upon questioning a girl realizes she is not real either. Nonetheless, he is quickly chased by the authorities to the subway where he runs into a subway car and is killed. As the story ends we find out that he was a experimental robot. A mate was created for him, but when she was dismantled he run amok! Only a so-so kick off to the issue for me, with a rather confusing plot although it did at least have an interesting resolution at the end.

Second is "The Legend of the Man-Macabre" by Al Hewetson (story) and Xavier Villanova (art). In New York's Old Greenwich Village, a man named Morris Manning is a fan of Edgar Allen Poe and has created a torture chamber in his basement based on the pendulum from Poe's "The Pit and the Pendulum". He stalks the streets trying to find someone to put in it, but is unsuccessful. He later heads to a party where he meets a woman named Melinda who he convinces to come with him to see a "monument" he has built. Upon bringing her to his home Melinda realizes what he's about to do to her and fakes passing out. She then is able to knock him out and put him in the pendulum. She decides to let him out just in time, revealing she has the same types of interests as him. In the final panel we see editor/writer Hewetson discovering the chamber. This one was a rather unique love story and it was good to see the Poe influence.

Third is "...Peter Piper Picked a Peck of Pickled Corpses..." by Al Hewetson (story) and Maelo Cintron (art). Peter Piper is a mortician in a small town. One night while feeding some of his pets he discovers a tiny humanoid creature that comes out of his floorboards and tries to communicate him in another language. the creature eventually is able to show Peter that he wants him to embalm his dead companion. Peter does so and we see a light shoot off into the stars, presumably the creature leaving the Earth. Peter dies that same night. Skywald has a tendency to occasionally get really over the top with its titles and this is an example of one. The story itself is pretty heartwarming.

Fourth is The Heap in "Even A Heap Can Die!" by Al Hewetson (story) and Pablo Marcos (art). After a brief absence the Heap returns to Psycho. The story begins with the Heap taking on the skeleton of a pterodactyl! In fact the first five or so pages are the Heap taking on a variety of living dinosaur skeletons, a pretty cool sight to see. The day comes and the Heap returns into his human form, Jim Roberts. He encounters an old man named Johann who claims he created the dinosaur skeletons; they are creations from when he made them as part of his work in movies. Johann knocks Jim out and later they get into a confrontation in a cave and Johann shoots him in the chest! Jim doesn't die though and when he becomes the Heap again that night, attacks Johann, injuring him by breaking his arm. Johann realizes only Jim can get him to medical attention and is able to remove the bullet from him, but ends up dying in the attempt. As the story ends Jim finds himself alive, but stranded in the middle of nowhere. A pretty strong return for the Heap, and I liked both halves of the story, the first with the dinosaur battling and the second, more character themed portion

Fifth is "The Transplant!!" by Ed Fedory (story) and Fernando Rubio (art). Rubio makes his Skywald debut with this story; he had also done a few stories for Warren. The bitter, old Gloria Melbourne, former silent film movie star seeks above all else to be young and beautiful again. She seeks out a Doctor Benson who tells her he can perform a transplant on her once they find a donor. Eventually a beautiful young woman who had commit suicide is found and Benson is able to move Gloria's brain from her old body to her new one. Gloria questions why such a lovely girl killed herself, but accepts her new body and leaves. When she doesn't show up for her check in, Benson seeks her out; Gloria has refused to leave her home and has identified why the girl killed herself, she had leprosy! A strong performance here from both Fedory and Rubio.

Sixth is "Tightrope to Nowhere" by Al Hewetson (story) and Juez Xirinius (art). Lawrence is an old man who has worked at a movie theater as a projectionist for decades, yet the owner has passed away and his son decides to have it destroyed and turned into a parking lot. Lawrence refuses to leave then kills the son with an ax. The next morning when the construction workers arrive he tosses the son's body in front of them then tries to flee, being shot and killed by the police. That isn't enough to stop Lawrence however, he rises from his grave and returns to the theater, now condemned, and watches old monster movies, finishing with a Dracula movie. As the light slays Dracula, it does the same to Lawrence and the story ends. This story is a bit over the top and I'm not the biggest fan of Xirinius's artwork, but I did like the fact that it progressively got more and more ridiculous as the story approached its end.

Seventh is "Re-Write: Frankenstein" by Al Hewetson (story) and Maelo Cintron (art). This is a two page comedic story and not related to the previous Frankenstein serial. Frankenstein's monster walks down the city street asking himself why the villagers always hound him, just because he's different. As we turn the page we find out that he lives in a town filled with babies! A fun way to wrap up the issue.
Posted by Quiddity at 11:06 AM