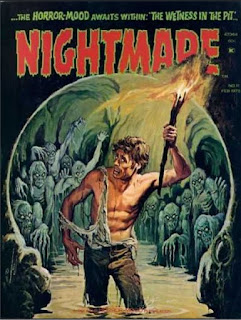 Today I cover issue 11 of Nightmare, cover dated February 1973, with a cover by Jose Antonio Domingo.

The two-page table of contents features art by Pablo Marcos, and the character Mr. Pook.

First story is "The Wetness in the Pit" by Al Hewetson (story) and Pablo Marcos (art). Our protagonist, a homicidal maniac is on the run from the police and flees underground, finding himself in a wet pit filled with numerous corpse monsters. Another monster, with a horn on its head approaches him and stabs him. On the final page we find out that the man had simply gone into a fun house of horrors tunnel at an amusement part and was stabbed by the horn on a railway cart.

Second is "Taw!!!" by Ed Fedory (story) and Antonio Borrell (art). An expedition occurs in the Himalayas where the abominable snowman-like creatures known as Taw rage. The expedition finds its way to a temple who warns them that they will find death and the Taw upon the mountain. Many Taws soon attack them during a storm and most of the men are killed. The leader of the expedition returns to the temple where he discovers that the men there transform into the Taw, and kill him. This story is Borrel's Skywald debut; he'll also get the final story of the issue. His art is fair, similar in nature to that of Pablo Marcos, at least for this story.

Next up is the one page "Lon Chaney Sr. in the Phantom of the Opera" by Al Hewetson (story) and Pablo Marcos (art). It features who else, but the phantom of the opera terrorizing a woman.

Third story is the latest in the Nightmare World series, "The Beasts of Tomb Beach!" by Al Hewetson (story) and Wayne Howard (art), based on a dream by reader Mike Black. Sitting down, reading a book, Mike suddenly finds that a large slime is traveling across the ground and starts grabbing a hold of him. He grabs onto a tree branch and is able to climb up it, then to a cliff, fleeing from the slime. These Nightmare World features are usually pretty out there, but this one isn't as so. It's just okay.

Fourth is "Where Gods Once Stood" by T. Casey Brennan (story) and Carlos Garzon (art). The city of Olympus lies in ruins, and the high priest Serbius finds himself deserted by all his fellow priests. Only the woman Electra remains to tell him of this. She begs him to stop considering himself a god, but a man, and yet he refuses. A harsh storm strikes the city and his attempts to stop it do no good. Lightning strikes the temple, destroying it and Serbius is quite injured, but makes his way to his alter, admitting to Electra that he is a man. Then the storm fades away. Brennan did a number of stories for Warren, often confusing hippie messes and this story is quite like one of them. I hope this is his only Skywald story! Garzon appeared to have deserted Skywald by this point so I wonder if this is an inventory story.

Next is "Corridors of Caricature" by Al Hewetson (story) and Jesus Duran (art). A group known as the Sanctum Club gathers at a mansion and talks about a Miss Ingels, a schoolteacher in Cleveland whose students were extremely unruly and she discovered to be vampires! Ingels talks to them then they investigate, and are told she was a nut who was about to be fired. Since a new teacher took over everything has been perfectly normal. The Club is then revealed to be a group of vampires themselves. The principal at the school reveals that he had them investigated and has discovered this and brings them to join a feast with the children, who are indeed vampires. Duran's art is pretty effective here, for a story that would have come off as a bit foolish perhaps with someone else drawing it. I assume Miss Ingels is named after Graham Ingels, the famous EC horror artist.

Next we have the one-page feature "Man Bat" by Al Hewetson (story) and Pablo Marcos (art). It features what else, but the half-man, half-bat creature biting a man's neck.


Sixth story is "Where Are the Inhabitants of Earth?" by Al Hewetson (story) and Zesar Lopez (art). This story appears to be a part of the Shoggoths series for which Zesar had previously drawn another story for (although aside from the Shoggoths there appears to be no relation to the plots in these two stories). A man named Crawford who has lived in outer space on his own returns to Earth, finding Manhattan largely destroyed and sinking into the ocean. He heads to his hometown of Arkham in New England where he is attacked by a Shoggoth which accidentally electrocutes itself. He comes across a hiding woman named Francine who claims that the Shoggoths have killed all the humans including her husband Joseph, and that she is pregnant. Crawford and Francine are able to make their way to a space ship and escape the Earth, but when she gives birth, it is a baby Shoggoth! Crawford shoots the baby into space as the story ends. Zesar's art continues to be quite strong and this is a pretty decent story, including the shocking ending.

Seventh is "Titan Weep" by Al Hewetson (story) and Pablo Marcos (art). During a play in ancient Rome, an actor playing Flavius Titan stabs himself. A couple of men in the crowd talk about the true story, how a few months ago Titan led his men into Sicily and due to the plague all but one of them perished. They notice a hooded man nearby in the audience. When he gets up to leave, the man reveals that he was the one who led the men to Sicily and that it wasn't a plague that got them, but rather the leprosy he had that spread to all his colleagues. A pretty decent short 3 page story, although the leprosy angle was just tackled in the latest issue of Psycho as well with "The Transplant".

We wrap up the issue with "The Horror War" by Al Hewetson (story) and Antonio Borrell (art). Planet Earth is contacted by another planet whose children have revolted and are attacking the adults, wielding not only traditional weapons, but even flying beasts. Edward Dixon, the planet of Earth offers his assistance and tells the leader of the other planet to invite in the leader of the children, feigning surrender, but to kill him once he's in their clutches and that without the leaders the revolution will fall. This all goes according to plan and the other planet succeeds. As the story ends we find the same thing had happened on Earth, with their children crushed under a similar rebellion and either locked up or dead. I question what the future will be for both Earth and the other planet with the children of their society dead or locked up. The present rulers will get old and die eventually. President Edward Dixon in this story is modeled after then US President Richard Nixon, even including what appears to be a super imposed photo of his head on one of the panels.