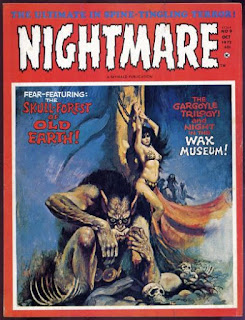 Jose Miralles provides the cover for this issue of Nightmare, cover dated October 1972. Interestingly enough, around 10 years later, Warren would use this same cover painting for the final issue of Creepy! Quite the oddity as James Warren apparently despised Skywald. Al Hewetson's takeover as editor becomes quite apparent with this issue and he writes literally every story/feature within.

The table of contents pages feature the introduction of a child host character that I've heard is named Mr. Pook (although he isn't named here) and is drawn by Pablo Marcos.

First story is "Markheim" by Al Hewetson (story) and Jesus Duran (art), in his Skywald debut. This is an adaption of the story by Robert Louis Stevenson. A man murders a shop keeper by stabbing him in the back with a knife. He then wanders around the man's home thinking about what to steal. The murderer soon starts having strange visions, first the old man crawling up the stairs with the knife in his back, then some police arriving and beating him. He has a vision of another man telling him to murder the maid when she arrives. Instead our protagonist decides to turn himself in. This story seems similar in nature to Ray Bradbury's "The Fruit at the Bottom of the Bowl", a story which was adapted by EC with Crime SuspenStories #17. Duran's art is pretty decent and well themed for the story.

Next is "The Nightmare World of James Edgar: Call Them Ghouls, Call Them Trolls, Call Them Things" by Al Hewetson (story) and Pablo Marcos (art). This story is the first of a multi-story feature where a fan would send in a dream they had and it would be adapted into a story! The first is from a man named James Edgar, who tells of how he was falling asleep in a cabin, reading some Skywald magazines when there are loud noises outside. He heads outside, seeing beautiful amazon women, accompanied by some trolls! The trolls start slamming him into a tree and welcome James to join them. they then go inside the cabin where James starts shrinking! James then awakes, finding himself snowed in! This story is rather surrealistic, as you would expect from a story based on a dream. I'm looking forward to this feature and think it has a lot of potential.

Third is the one page feature, "The Guillotine" by Al Hewetson (story) and Felipe Dela Rosa (art). I wonder if this was originally intended to be a frontispiece. It tells of the inventor of the Guillotine, Joseph Guillotin, its usage in France, and how he eventually died by his own invention!

Next is "Zoo for the Beasts of The Universe", a two page feature from Al Hewetson (story) and Maelo Cintron (art), also in his Skywald debut. Another very brief feature, it shows us a man and woman in a cage, part of a zoo on an alien planet. They are accompanied by a variety of strange looking beings, while aliens watch them from outside. Cintron provides a really strong art job here for his first story.

Next is "The Skull Forest of Old Earth" by Al Hewetson (story) and Zesar Lopez (art), the third artist making his debut with this issue. This story, which I believe to be the first of a series is influenced by HP Lovecraft's works, although it appears to be an original story. On ancient Earth, the inhabitants of Uranus (who look just like humans) have inhabited Earth. These beautiful aliens live in apparent paradise and luxury, but one of them discovers his lover missing. Upon searching for her they find just a skeleton. Nearby they find an old civilization, occupied by Shoggoths, beast like beings that has captured several of them, either tying them up or eating them. The Shoggoths end up killing all of them, sans a child who plays with some monkeys that the narrator tells us eventually lead to the origin of man on Earth. Very happy to see Zesar's Skywald premiere. He was an artist who did around 5 or so stories in Vampirella after Skywald had folded (including 2 stories featuring Vampirella herself) and I always hoped he would have done more. Looking forward to seeing lots more stories from him here.

After that is "The 300th Birth Day Party" by Al Hewetson (story) and Ramon Torrents (art). Cecille is married to the ugly and scarred, yet rich Walter, and is carrying on an affair with her doctor. When Cecille discovers she has cancer, the only option is to freeze her body, until a time in the future when a cure is found. Cecille willingly goes through with it, hoping that when she awakens she'll have her husband's money, but he'll be long dead. She wakes up 3 centuries later, but finds to her horror that due to advantages in medicine, Walter is still alive! Not much of a horror element to this story, but I always enjoy seeing art from Ramon Torrents.

Next is "The Gargoyle Trilogy" by Al Hewetson (story) and Felipe Dela Rosa (art). This story doesn't appear to be connected to the Gargoyle story from Psycho #8, even though it is drawn by the same artist (and the Gargoyles look quite alike). It is about three different gargoyles which are created, based on the famous 3 monkeys of which one can't see, one can't hear, and one can't speak. The first gargoyle is the one who can't speak and causes much destruction as it comes to life. We then go into the future, the year 2092 in an advanced society. A young girl heads into a forest where she is killed by the gargoyle who cannot hear. The story moves forward another approximate 100 years when the renaissance of the arts is announced. A gargoyle, the one who cannot see terrorizes and kills some actresses. Dela Rosa's odd art style fits things pretty well; and while none of these stories are too fulfilling, it is good to see the unique story telling feature.

After that is "The Night at the Wax Museum" by Al Hewetson (story) and Xavier Villanova (art). A woman makes her way into a Wax Museum which is full of various wax replicas of famous monsters, such as the Frankenstein monster, as well as historical figures such as Cleopatra and Hitler. She eventually comes across the wax figure of Dr. Jekyll, who turns into Mr. Hyde. She flees, finding many of the wax figures have come alive! As the story comes to a conclusion she is now a wax figure herself, the victim of a beating from Mr. Hyde.

Pablo Marcos then provides a one page feature of Dracula.

Our final full length story of the issue is "The Beast Within" by Al Hewetson (story) and Amador Garcia (art). A group of hunters pursue and kill a wild alligator in the jungle, despite it being illegal. The hunters find a cabin nearby in the woods. One of the hunters, a woman, comes across a werewolf and is slain by it. Things quickly escalate as the hunters start getting scared and paranoid. One of them shoots another, another gets sucked into quicksand, another gets shot, and we quickly find ourselves down to 3 of them left. they start speculating about who of them can be the werewolf, and eventually all die to the true werewolf, revealed to be the dog! Basically the exact same ending we got to a story back in the first issue of Nightmare, I liked it better the first time. This story is a bit of a confusing mess with too many characters and so much going on.

The next issue advertisement towards the end of this issue provides a pretty memorable skull drawing by Pablo Marcos.

One final feature for this lengthy issue is the one page text story "The Thing in the Alley" as written by Al Hewetson and featuring art by none other than Berni Wrightson himself, making his sole appearance in a Skywald magazine.
Posted by Quiddity at 12:15 PM