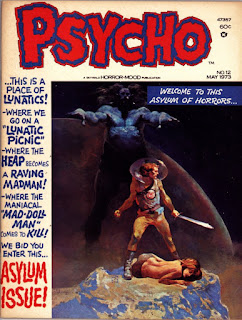 Today I'm covering issue 12 of Psycho, featuring a cover by Jeff Jones. This issue is cover dated May 1973.

First is "The Mad Doll Man" by Al Hewetson (story) and Jose Gual (art). Himmer is an old German doll maker, who is visited by men Maas and Spiegel. They had seen some of Himmer's child-like dolls outside and are plotting to escape from East Germany to the west by storing them aboard a train. When they make their way there, Spiegel is revealed a traitor, loyal to the German state. However Himmer's dolls are revealed to actually be child vampires, and they kill him. With the sunlight however, they all perish, and Maas realizes that Himmer is a doll himself, made of wood! A total nonsense out of nowhere ending for this story, but Gual provides some fairly strong artwork, including making the "dolls" scary looking.

Second is "Lunatic Picnic" by Al Hewetson (story) and Zesar Lopez (art). A family goes out for a picnic and the parents decide to go off on their own for a while, leaving the children to play by themselves. While chasing a lost ball, one of the boys falls down into a small chasm. His brothers and sisters come to help him out, but suddenly an earthquake rages. A giant snake comes out of the ground and consumes all the children, to their parent's horror. There's not much plot-wise to this story, but Zesar's art is strong as usual.

Third is "Studies in Horror" by Al Hewetson (story) and Felipe Dela Rosa (art). This two page story features Rodman Sterling, a man who has painting featuring events from many past Skywald stories such as The Slither Slime Man, The Asylum of Frozen Hell, Beware It... Fear It... It Screams! and The Skull Forest of Old Earth. While quite self-referential, I liked it and wouldn't mind if we see a similar feature in the future.

Fourth is "The Weird Way it Was" by Al Hewetson (story) and Pablo Marcos (art). A man has bizarre images of giant ants, but soon realizes he is an ant himself, sent to plot the takeover of humans, by temporarily taking on their form. He returns to being an ant and travels back to his colony, where we find he has been gone 9 years! He tells his fellow ants of how now is a prime time to take over as humanity is constantly fighting with one another. The ants head to the surface, only to find out it is too late, man has wiped himself out. Then suddenly things go completely out of left field as a giant thumb tears half the page off and the ants realize they are only characters in a story. Then on the final two pages we find this was all the dream of a girl named Alice. I appreciate Hewetson's willingness to go totally bonkers with his ending as we just saw in Nightmare #12 with "I Am Dead: I Am Buried" and this story is much in the same vein.

Fifth is "The Swordsman of Sarn" by Gardner Fox (story) and Jack Katz/Vince Colletta (art). This story was originally intended for a sci-fi magazine Skywald was considering putting out and was an inventory held onto for a while when that didn't come to pass. Alas, I never particularly care for these swordsman/barbarian type stories and this story is much of that. It features an astronaut named Steve Grimm who arrives on another planet and is quickly attacked by a large barbarian with a club. From there he meets the beautiful Suanna, they are captured, he releases another alien captured in a crystal and slays his last enemy only for Suanna to disappear. The ending of this story makes it seem like this will be a multi-part story, but I hope this is the last we see of this.

Sixth is The Heap in "And the World Shall Shudder" by Al Hewetson (story) and Xavier Villanova (art). Yet again we have changed the artist for The Heap, but Villanova does a fairly strong job here, albeit a style less cartoonish than that we saw for the series previously. It seems like we've somewhat started anew, the Heap is described as changed, the human side of him is considerably subdued while the monstrous side of him is on the rampage. He attacks a cow, then climbs in a train where he kills some people. Upon making it to New York City he is grabbed by a clamp with a police helicopter, only to be dropped through the Empire State Building, all the way down to the subway where he stops a subway car then attacks a child. It is interesting to see the style of the Heap drastically change, but I'm not sure how long this style of storytelling will be effective.

The issue concludes with "Welcome to My Asylum" by Al Hewetson (story) and Xavier Villanova (art). Villanova uses a bit of a different style here, I actually thought that this story was drawn by Fernando Rubio when I first read it. We meet an old man who shows us through his asylum, meeting a witch, a room with a madman laughing, a skeleton chained to a wall, and a basketball game played by corpses! The perspective of the story is such that at the end, you the reader are dragged into the game! Not much of a plot, but this is a fun way to end the issue.