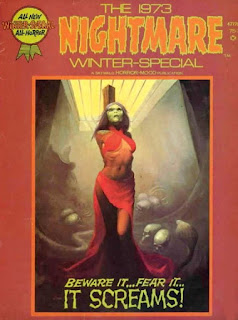 Today I cover the Nightmare 1973 Winter Special, which has a cover date of March 1973 and a cover by Ken Kelly.

First is "Die Mummy!" by Al Hewetson (story) and Jesus Duran (art). 74 year old Vanessa is an aged movie actress with no roles for her until her manager finds a man named Scott Henders who is doing cheap horror movies who will take her. Vanessa is cast to be a mummy and as the movie films she is fake stabbed then wrapped up in bandages for real. Vanessa suddenly feels young and strong again and starts going on a rampage, killing many of her costars until they are finally able to take her down. Upon removing the bandages from her face they find just a mummified corpse within! I gotta say, I'm not a fan of mummy stories, but this story was considerably better than I expected going in.

Second is "I Left My Heart in the Burial Pit, I Had No Choice" by Al Hewetson (story) and Jose Gual (art). Mobster Romeo Puccino wants to go straight due to his girlfriend Juliet, but instead his mobster colleagues grab a hold of both of them and stab Romeo. Left alone with him, the distraught Julet then stabs herself. From here the story gets considerably confusing as we see both Romeo and Juliet rise on their own multiple times and cut their own heart out, I'm not sure if they were supposed to be literally alive or this was just supposed to be their ghosts. As the story ends their heartless spirits depart. This story is obviously influenced by William Shakespeare's Romeo and Juliet, with a more modern twist, and Gual's art is good, but the second half of the story is considerably confusing.

Third is "Beyond the Walls!" a one page feature from Ed Fedory (story) and Xavier Villanova (art). It tells how in the city of Bruges an ancient stone house was purchased and it had an unnameable stench. Upon breaking down one of the walls, inside was found the skeleton of a winged humanoid creature.

Fourth is "Mephisto's Brand" another one pager from Ed Fedory (story) and Jesus Suso Rego (art). The Mephisto Brand is a mark found on an accused witch to prove she is doing the devil's work. It could appear in various forms, such as a hand, bat or spider.  We then are shown how those without any such mark are declared to have invisible marks, so they can be killed anyway.

Fifth is "The Horror Tub" by Al Hewetson (story) and Fernando Rubio (art). Harlan Huck is an obsessed collector of the macabre and seeks to purchase a painting from a man named Anders. Anders refuses to sell at any price, so Huck resorts to some ruffians who set Anders' home on fire, steal the painting and then kill him before Huck. Huck awakens that night to find his own home in flames and is confronted by the rotted corpse of Anders. The next day people find a hole where the home used to be. We are shown that in another place Huck and Anders battle each other in a room showing Huck's collection.

Sixth is "The Event in the Night?" by Al Hewetson (story) and Pablo Marcos (art). A man named Henry White is in a car accident on a curving cliff road. A man comes out to attend to him and brings him to his nearby home to stay with him, meeting there his beautiful and far younger wife Mary. When Henry later arrives at the convention he was going to, he is told he was gone an entire year! Believing it to be connected to the house he stayed at, he goes there, finding only ashes in its place. He then starts remembering what happened, in particular Mary attacking him, being brought before Satanists in the basement where Mary is about to sacrifice him, then being able to shove her into a fire and escape. Henry suddenly wakes up, and it being revealed to all be a dream. He then again gets in the car accident and things start anew. I never care for the "it was all a dream" ending, which seems to me to just be the writer running out of ideas. Marcos' art in this story reminds me a lot of that of Jose Gonzalez.


Seventh is "Beware It... Fear It... It Screams!" by Al Hewetson (story) and Antonio Borrell (art). Anton Werner is a European immigrant living in a town named Amsterdam ranch. He keeps a mysterious pit on his property and angers the locals when Annabel Lee, the most beautiful woman there falls in love with and marries him. Annabel finds Anton to not be a good husband, he has tremendous self pity and starts accusing her of having relationships with the ranch hands. When she falls off her horse and is saved from a snake by one of the ranch hands, Anton thinks she is having an affair, shoots the man in the face and then ties her up and throws her in the pit. He pours honey over her and the horrific creatures in the pit consume her. Annabel still loves Anton however and rises from the pit to return to him, only a skeleton. The next day the ranch hands find the shredded corpse of Anton handing from the rafters with Annabel nowhere to be seen and the pit is filled in. Some pretty good art here from Borrell and a great story title. The panel when Annabel returns to Anton, now just a skeleton is quite effective. At the same time, Anton is an incredibly unlikable protagonist and it is quite absurd that he killed his wife over his own delusions.

Eight is "The Night of the Mutant-Eaters" by Al Hewetson (story) and Dennis Fujitake (art). A group of astronauts land on a planet in order to repair their ship. While the planet is occupied by humans, they are savages and the planet is incredibly overpopulated. One of the astronauts, Lt. Niw becomes enraptured with a young woman named Ula and the two make love to each other. When the ship is repaired and takes off, he takes Ula with him, who is pregnant. He reveals this to the others which makes them incredibly upset. When Ula gives birth, it is to 43 babies and kills her. The crew desire to kill the children in order to survive, but the children rapidly grow, suck up all the oxygen and then eat the crew, eventually dying themselves of starvation. It was good to see another story from Fujitake, who I presume is yet another artist pushed out by the Selecionnes Illustrada artists.

Ninth is another one page feature, "The Last Witch!" by Ed Fedory (story) and Antonio Borrell (art). This brief story tells of how in the Mexican town of Qjinaga, a woman is accused as a witch and is burned at the stake.

Tenth is "Whether Man or Scarecrow" by Al Hewetson (story) and Felipa Dela Rosa (art). The protagonist of this story is a scarecrow named Perry. One day an old man appears before him, saying he is his fairy godmother and can grant him 3 wishes. His first wish enables Perry to speak. He tells him he can have two wishes, but should make them soon as he is an old man and can die at any minute. Perry uses his second wish to become human. Unfortunately things soon go south for him. He stumbles into an apple cart, meets up with Judy, the daughter of the local farmer who he is in love with, but when her father sees them together he shoots him and accidentally kills Judy as well. Perry is then stomped on by a cow, hit by a car and repeatedly shot while riding a tractor and trying to escape. Perry tries to make his last wish, that this all never happened, but it is too late, the old man already died. As does Perry, whose tractor crashes and he is impaled on some wooden fencing. This story is hilariously over the top with how unlucky Perry gets once becoming human, and is quite entertaining as a result.
Posted by Quiddity at 11:14 AM