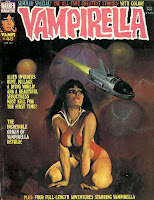 Ken Kelly provides the cover for this issue of Vampirella, from October 1975. This issue is mostly reprints, with one new story.

First is "The Origin of Vampirella" by Jose Gonzalez (art) and Budd Lewis (story). This story was originally printed in the first Vampirella Annual, and was rewritten here by Budd Lewis. This story features Vampirella on Drakulon with her lover Tristan. The planet is dying and while Vampirella seeks to kill animals for their blood, Tristan doesn't want to do so, nor does anyone else, resulting in the people all dying off. Eventually people from Earth arrive on Drakulon as well and end up killing Tristan, He rises up again however and confronts Vampirella one last time before she heads to Earth.

Second is "Death's Dark Angel" by Jose Gonzalez (art) and Archie Goodwin (story), originally printed in issue 12. In its original printing, this story was Jose Gonzalez's first appearance in a Warren magazine. Its an okay art job, but pales greatly in comparison to the stuff he was producing by this point. This story features Vampirella being captured by an old man, W.W. Wade, who also controls a demon called Skaar. Wade wants to cheat death and thinks he can do so by getting Vampirella to bite him. He captures the Van Helsings as well. Vampirella eventually does bite him, but because she's not a traditional vampire, it kills him for good.

Third is "Isle of the Huntress" by Jose Gonzalez (art) and Archie Goodwin (story), originally printed in issue 14. This story surrounds Vampi, Pendragon and Adam arriving on an island where a werewolf like beast roams. The werewolf is actually a woman who lives on the island with her husband, who while looking for a cure also procures bait to be hunted by her in her wolf form. Vampi & friends are able to save themselves from being prey and kill the two of them.

Last is this issue's sole new story, "The Monster Called Vampirella" by Zesar (art) and Bill Dubay (story). This story was in color. Zesar was a pretty good artist, but only did five stories for Warren, with this being the first of them. I've already covered most of his other stories in other reviews. Unfortunate that he didn't do more Warren stories. This story continues with the storyline from the previous issues, where Pendragon and Vampi have been shot and Conrad has been killed. In this story Adam finds the true culprit behind whats happening, Sara, Pendragon's daughter, and his friend, Paul Girard. Paul is killed and Adam is arrested and questioned by the police. Vampirella meanwhile is attacked by burglers, but kills them and flies off.
Posted by Quiddity at 10:04 AM