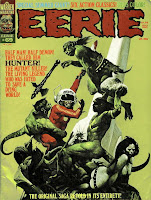 I prefer to cover reprint issues on this blog as little as possible, but for the moment I've run out of my back log of Eerie reviews, so I'll be using one for today. Hopefully by the next time Eerie comes up in the cycle I'll have a new one to cover. Anyway, this issue, from October 1975 is a Hunter special, featuring all six of the original Hunter stories. The cover, a new one, is provided by Sanjulian. Berni Wrightson and Paul Neary provide a one page intro from Cousin Eerie and Hunter on the inside front cover.

Paul Neary provides the art for all six stories here. Rich Margopoulos provides the writing for the first three stories, Budd Lewis for the fourth, and Bill Dubay for the last two. The original Hunter stories were simply called "Hunter", here new names have been provided for five of the six stories. In addition, the last story is in color (the original printing was black and white). Hunter was one of Eerie's most popular recurring characters, although in this blogger's opinion a great many of Eerie's other series surpassed it in quality. Nonetheless, the series had very good art throughout, and had a very good conclusion. Unfortunately the series would be cheapened considerably in later years towards the end of Eerie's life (as we've seen in some recent reviews) when they brought him back and tampered with the original storyline. Anyway, lets get on to the content of this issue.

The first story is "Hunter", featuring the character's first appearance. Hunter is a half man half demon in the future who battles demons. This premiere story takes place in a snowy wilderness where Hunter comes across a church and battles three demons within it, which he defeats.

Second is "Demon Spawn". This story tells the origin of Hunter. In the year 2001 (ha! years back for us now, but over 25 years in the future at the time this issue was published) nuclear war resulted in mutating much of humanity into demons. One such demon, General Ophal raped a human woman, producing the offspring Demien, aka our hero Hunter. After her death from Pox he joins a group of human soldiers and is trained on fighting demons.

Third is "Demon Killer" Hunter comes across a village of people being attacked by demons. At first he is quite arrogant, demanding food, and is nearly lynched by them. When the demons arrive he fights them, including a duel on winged creatures. One of the men manages to gun down all the demons, but unfortunately ends up killing his daughter along with them.

Fourth is "Phalmark Phal" Hunter comes across the town of Pharmark Phal, where demons have killed and raped many after finding that Hunter had been there. At the request of a dying friend Hunter fights the demons and saves his daughter.

Fifth is "The Blood Princess". Hunter comes across a castle filled with demons. There he is captured and thrown in a cell with an old man, who reveals himself to be Schreck (see Schreck's storyline in issues 53-55, reviewed previously). The demons had taken over the castle but apparantely now there's only 3 or 4 left because of a ghost, the "Princess of Bathory Castle" who has been killing them off. When a demon guard is killed they escape and find her, a little girl, along with a huge nuclear missile.

Last is "The Unholy Trinity". Hunter, along with Schreck and the Blood Princess arm the nuclear warhead to go off in one hour. Hunter heads off to meet with Ophal and have one last confrontation. Scheck and the Blood Princess meanwhile take out the remaining demons and find some mutants. Hunter tries to kill Ophal but finds he is unable to. The bomb fails to go off however, and Ophal kills Hunter, dying seconds later when Schreck kills him. A depressing end, but at the very least Hunter's quest of eliminating the last remaining mutants comes to fruition.