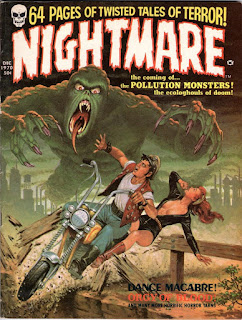 The cover to this issue, dated December 1970, is by Brendan Lynch. The art and script for these stories are uncredited; those I have listed below I obtained from Richard Arndt's book "Horror Comics in Black and White".

We begin with the cover story, "The Pollution Monsters" with art by Don Heck/Mike Esposito and story by Mike Friedrich. Bikers Butch, Annie and Sunny sell 'the soul of the nation' to an old man offering them a fuel that is far more powerful than regular gasoline. They use it on their motorcycles and ride off. The old man is quickly revealed to be the devil. As they ride, the fumes from the motorcycle creates giant pollution monsters that run amok. The rest of the story is these monsters on the attack. They eventually seize the three main characters and turn them into pollution monsters as well. This two-part story is quite the flop to kick off the start of my Skywald coverage, a rather pointless and silly tale.

Second is "Master of the Dead!", drawn by Norman Nodell and Vince Alascia. Pierre Jarnac is obsessed with trying to raise the dead and lead them under his command, causing his own brother to have him committed. Pierre fakes things long enough for them to let him out on good behavior then finds a job as a caretaker at a graveyard where he renews his obsession and experiments. Finding no success, he calls out to the dead to rise for their own sake, and they do so! Yet when his brother arrives and Pierre starts calling out to the dead to kill those who mean them no harm, the dead turn on him and stomp him to death.

In "Dance Macabre" drawn by Bill Everett, a couple, Jack and Daisy Blake are dancers on the island of Morando. After being fired, they come up with a voodoo-themed dance of the restful dead, thinking it will be over the top and make them famous. It does, and they get more and more well known but start seeing visions of the dead claiming they will be punished. This causes the two to grow apart and eventually hate each other. Jack tries to strangle Daisy, but she pulls out a knife and the two end up killing each other.

In "Orgy of Blood" by Ross Andru/Mike Esposito (story and art), a man named Phillips meets a woman at a bar that he takes to her home only to discover she is a vampire when she chains him to the bed and drinks his blood. Phillips wakes, revealing it to all be a dream and sees his psychiatrist who hopes that a prescription will solve things. Phillips dreams intensify however. The vampire woman first brings her daughter with her, and in a later dream brings her mother too and they all feast on him. Phillips is told only a sanatorium can help him but when the nurse arrives and looks quite familiar, Phillips realizes that the psychiatrist visits were all a dream, and getting bitten by the vampires was the reality. A rather silly tale, I found it funny just how further and further over the top it was getting as the vampire brought more members of her family to feast on Phillips.

Next we have the one page "Nightmare Pin-Up" drawn by BIll Everett. This is a one page illustration of a Grave Ghoul digging what else, a grave. The one page of art without a story is something Warren also commonly had done for many years, so this is quite in line with what I'm used to.

The three page "The Skeletons of Doom" is a text story by Art Stampler, featuring a young woman named Myra whose research into ancient pharaohs gets her seized by a group of underground skeleton men who worship Isis who has power through a giant diamond. When a fellow captive Alan (who for some bizarre reason suddenly is called Rich for much of the climax) damages the diamond, they are able to escape to safety. Bill Everett provides a few images for this story.

"Help Us to Die!" features a man named Jim Torrence who is obsessed with Egypt. While at the museum with his wife Mary, he spots a newly discovered mummy, who he sees opening and closing its eyes. Jim thinks if they steal the mummy they could be world famous and even find the secret to eternal life. That night they steal the mummy and bring it to a cave in the hills. The mummy is revealed to be alive after all and they help it remove its bandages, revealing an old man with a small canister with him. Jim reads on the canister to drink it for eternal life, and that only those of royal lineage may partake of it. The mummy gets angry causing Jim to attack it and smash its head against the rocks until it seemingly dies. Jim and Mary then drink from the canister, only to find that while the vial provides eternal life, it doesn't provide eternal youth. We see the years quickly go by and they become withered and aged, hoping for someone to find them and help them die. A rather silly story, Jim reads a warning on the canister, yet promptly ignores it and soon he and his wife discover eternal life isn't as great as they thought it to be.

Next is "The Thing from the Sea". The original art for this story was by Wally Wood but Mike Esposito has also amended the artwork A man named Smithers gets into a gambling argument with a colleague named Murray while working as crew members on a ship. Smithers throws Murray, presumably to his death. But Murray soon rises back to life and starts his long walk back to the shore. Smithers arrives on land and meets Murray's fiance, eventually getting into a relationship with her and asking her to marry him. But just then Murray's rotted, bloated corpse arrives. It grabs a hold of Smithers and brings him into the sea with him until they both sink under the water. The ending of this story is extremely similar to the story "Scared to Death" from Tales from the Crypt #24, which incidentally enough was also drawn by Wally Wood.

Our following story is a mere 3 pages, "The Creature Within". Playwright Nathan Foxx dreams of a horrifying vampire-like creature. This inspires him to write a play, which quickly sells out due to his good reputation. However the night of the performance the monster appears to attack the lead actress, and the lead actor is soon killed as well. Foxx is told they were bitten by some kind of animal and wonders if it was the creature from his dreams. All of a sudden the creature appears out of nowhere and kills him. This story was super rushed, but it was also so predictable it was good to get it over with quickly. The play in the story seems somewhat inspired by The Phantom of the Opera and the lead actor's name is a reference to the star of the movie, Lon Chaney.

The issue concludes with "The Deadly Mark of the Beast!" with art by Syd Shores/Tom Palmer and story by Len Wein. A werewolf has been ravaging the countryside. A man named Collins is convinced that a newcomer to the village, Blake is the werewolf because he's seen walking around at night with his hound. But when Blake is revealed to be blind, people dismiss Collins' claim and leave. When Collins' wife is killed, he becomes enraged, taking Blake at gunpoint at his home and saying they'll wait til the full moon. When Blake grows agitated at the full moon, Collins guns him down. But Blake's hound suddenly reveals that it is a wereman and kills Collins! The ending to this story was quite hilarious and is similar to a comedic episode of The X-Files from a few years back during its short lived resurrection.

Overall a rather mediocre issue to kick things off with. A lot of the issue (Master of the Dead!, Dance Macabre, Help Us to Die, The Thing from the Sea! and The Creature Within!) are reprints from various 1950s horror comics.
Posted by Quiddity at 6:19 PM