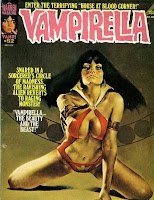 A pretty good issue of Vampirella, starting off with a cover by Enrich.

First is Vampirella in "Dr. Wrighter's Asylum of Horror" by Gonzalo Mayo (art) and Bill Dubay (story). The Dr. Wrighter of the title is a doctor that Vampirella and Pendragon meet that has created a freak show. In reality he too is a freak, wearing a mask to cover up his horrifically deformed face. He seeks to make Vampirella a freak as well by transplanting her head with his assistant, in order to make her a movie star. This makes the other freaks angry however as he never had any such plans for them and they kill him.

Second is another Vampirella story, "The Beauty and the Beast" by the same team as the first story. In this story Vampirella becomes the subject of a hollywood writer/producer who hopes to make her into a movie star and help his own career in the process. His planned storyline is so horrific though that Vampirella mistakenly believes that he and his comrades are working for Chaos and bites them all, blowing a legitimate chance for her to become a movie star. Of course within 15 issues or so of this issue Vampirella would become a movie star anyway. Mayo's art is terrific in both these stories, far better than the work he had done in many of the 1980's issues of Vampirella that I've been covering over the last few months.

Third is "The House at Blood Corner" by Ramon Torrents (art) and Gerry Boudreau (story). A writer and his wife, whom he married only for her money move into a reported haunted house. It isn't long before they find a rat in their bedroom and see the spectral image of the home's former owner. It ends up that it was all a trick by the broker who leased them the house, who created holograms that made the house appear haunted. He wants the writer to write a book about him, but the wife, whose real father died in the house instead gets revenge by killing them both. Torrents does a good job in making the haunted house appear really scary in this story.

Next is "Stake-Out!" by Jose Ortiz (art) and Boudreau (story). A military leader seeks to destroy the world's vampires, despite the fact that in this age they get along peacefully with normal humans. He hopes to use a new weapon to destroy them, but tries to make it seem as if the vampires started it by killing off one of his own leaders. When the leader doesn't turn into a vampire himself however, the truth is revealed and the leader is handed over to the vampires to eat as punishment.

Last is "The Segerson Experiment" by Zesar (art) and Gerry Boudreau (story). Another haunted house-themed story featuring a young woman going to the house of the well known horror author Segerson and finding various horrors there. Not much of a plot in this heavily mood based story, but Zesar's art is quite nice. Its a shame he didn't do more work for Warren than the measely five stories he did.
Posted by Quiddity at 5:52 AM